What is a Performance Bond?

A performance bond is a type of surety bond that is used primarily in projects that have a defined beginning and end.

One party, known as the Obligor (usually a contractor in a construction based project), gets a guarantee from a third party (the surety) to guarantee their work is done on time, done satisfactorily, and is sufficient to meet the terms of the agreement.  The surety guarantees that the Obligor will meet all of their obligations to the Obligee (usually the owner of the project).

What is a Payment Bond?

Why are Payment Bonds and Performance Bonds needed?

Owners of property are not able to fully determine the risks involved with their construction contractors.  Given the incredible complexity of a modern building project – from financing, legal concerns, marketing and sales, project management, to construction – it’s difficult to manage the entire process, much less eliminate risk.

Nearly every fidelity bond that is written is based on the obligee’s (or the person being guaranteed by the surety) “faithful” performance of their duties during the normal course of business.  In the old days, the contracts would contain words like “well and truly” or even “well and faithfully” when discussing these duties. 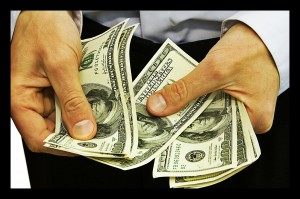 These terms don’t just refer to the honesty of the employee, although that is certainly a very large part of the understanding.  It is more than that.  It also includes elements of hard work as well as an amount of reasonable competency.  That is, it’s not enough to just show up at the job and not steal anything.  Instead, it requires that the employee actively work at the job in a reasonable manner.

This understanding was put to the test in Union Bank v. Forrest, 3 Cr. C. C. 218.  In the Union Bank case, the court held that the neglect by a cashier to settle up the daily accounts of the teller pursuant to the policies and procedures of the bank would not discharge the surety once an action was brought.  Thus, the sureties were not relieved due to a lack of diligence or skill as that was considered a key part of the underlying terms of the fidelity bond itself.

However, an employer could just as easily waive the diligence portion of the bond on behalf of the employee.  Thus, in Singer Mnfg. Co. v Boyette, 74 Ak 1, the court held that where a salesman was supposed to provide a weekly report pursuant to the terms of their employment agreement and where the employer waived this reporting, then the surety was discharged as well.

The case law can unfold in multiple strange ways.  You need to remember that, many times, specific case have holdings that are specific to the facts of that case.  Thus, weird case law gets borne as those holdings should not be used for further cases.

In the Odd Fellows’ Mutl. Assn. v. James case (63 Ca 598) a company was held liable (and by extension, the surety was forced to pay) due to a breach of his duties.  The fidelity bond held that he was to “in all respect fully, faithfully, well and truly” executed all of his work according to the rules, policies and procedures that the job required.  As a part of his duties, the secretary was to both keep all of the books and records of the company in a neat and orderly fashion and surrender them at the end of his employment with the company.  Further, the secretary had a duty to remit to the employer any money that was paid directly to him.  The secretary did not immediately pay over these funds, but instead put them in the company safe.  When the safe was broken into and the funds stolen, then the company secretary was held to have breached the faithful performance of his duties and held liable.

How do these bonds work?

Quote and performance bonds work extremely differently from one another and several construction business choose to operate in one or one more kind of bond. Typically proposal bonds are a little less difficult compared to efficiency bonds but do not had the very same quantity of assurances. By understanding these differences you could ready the right bond for your construction job and be awarded with more job as a result of your understanding.

Bid bonds: proposal bonds are generally a warranty or tiny cash money deposit that is submitted by bidders for any kind of construction job, and that the succeeding bidder will have to submit after the task has actually been granted to them. When the contract for any type of building job is made the winning bidder will certainly then have to send a bid Bond to function as a guarantee for the construction process and the entire project. Unlike some various other types of protection bonds, quote bonds are also often much less expensive since they might not need the use of a company or added security bonds depending on the preferences of the contractor and the job carrier.

Performance bonds: efficiency bonds feature warranties from a third-party guarantor as opposed to the building contractor. This sort of safety bonds are normally obtained with the help of an insurance policy firm or bank establishment and this will certainly cover the whole cost of the construction task if the specialist falls short to provide. These kinds of bonds normally take a a lot longer approval. Due to the fact that they need to undergo numerous institutions. They could additionally be associated with additional costs as an agency could should be made use of to make the safety bond. If the specialist is not able to complete job it could be very expensive for them if performance bonds have been taken out. Due to the fact that of the prolonged authorization process and additional prices a few different kinds of building tasks may require an efficiency bond.

Comprehending the distinction in between these 2 kinds of bonds can assist you bidding for any type of construction project.

What is a Business Service Surety Bond?

Is a Business Service Bond the right Bond for my Business? A business service bond, also known as a performance...
Read More

What is a surety bond? A surety bond, also known as a contract bond or performance bond, is a written...
Read More

What is the Claims Process for a Bid Bond?

How does the Claims Process work for a Bid Bond? The first step in making a claim is to notify...
Read More

When Is a Performance Bond Needed?

How Much Does It Cost To File a Bid Bond?

How to File a Performance Bond?

Where can I get a Performance Bond in New Jersey? Many types of work for municipalities in New Jersey require...
Read More

Why This Is Important Most Bond Brokers Simply

Why This Is Important A lot of bond brokers merely promote bonds, we create them. Underneath the Miller Act, which...
Read More

An In Depth Study Of The Importance

An In Depth Study Of the Importance of a Bid Bond There's financial danger related to any type of service...
Read More

What You Need To Know Most Bond Brokers

What You Need To Know Many bond brokers just sell bonds, we create them. Your insurance policy person must be...
Read More

A Deeper Look At How Long It

A Deeper Look At How Long It requires to Get a Bid Bond The Surety Bond Assistance Program provides technical...
Read More